About Our V to µV Converter

"If you go more and deeper into things, you will eventually discover math there."

Gone are the days when you had to spend too much time on conversion and calculation. Now, you have a Handy converter to switch the volts to microvolts within a split second.

What is the Meaning of Volts?

In simple words, a volt is a unit that measures electric force. It is the SI-derived unit for Voltage, i.e., the difference in Electrical potential energy/ Electromotive Force, per unit of charge, between two points of conductors.

One Volt equals the potential difference generated by moving one ampere of current against one ohm of resistance.

What is the Symbol of Volts?

Volts can be represented by the Symbol V. For instance, you can write 1 volt as 1 V.

How Can You Convert Volts to Microvolts?

The Volts to Microvolts Conversion Formula.

You can use the below formula for Volts to Microvolts Conversion, 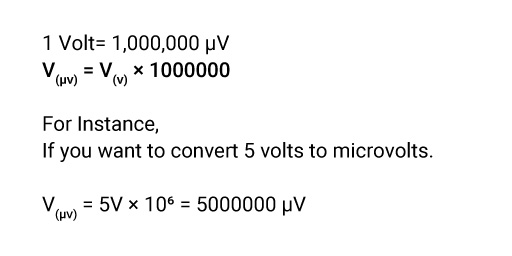 How to Use Our Volts to microvolts Converter?

Now, you can convert V to µV using our tool in the blink of an eye.

How Many Volts Are in a Microvolt?

One microvolt is equal to 1/1,000,000 of a volt, which is the potential difference generated by moving one ampere of current against one ohm of resistance.

What is the Difference Between Volt & Microvolt?

Volt is the ST unit of Voltage (electrical potential difference) and electromotive force. 1 volt= 1,000,000 Microvolts. Volt is denoted by V.

Microvolt is also an SI derived unit for Voltage, but it is the multiple of Volt. Microvolt is the 1/1,000,000 part of a volt and is denoted by µV.

What is the Volt Unit of Measure?

Volt (V or E) is the measuring unit of Voltage (electrical potential difference) and electromotive force.

Examples of Converting Volts to Microvolts.

Here are some examples to help you convert volts to microvolts.